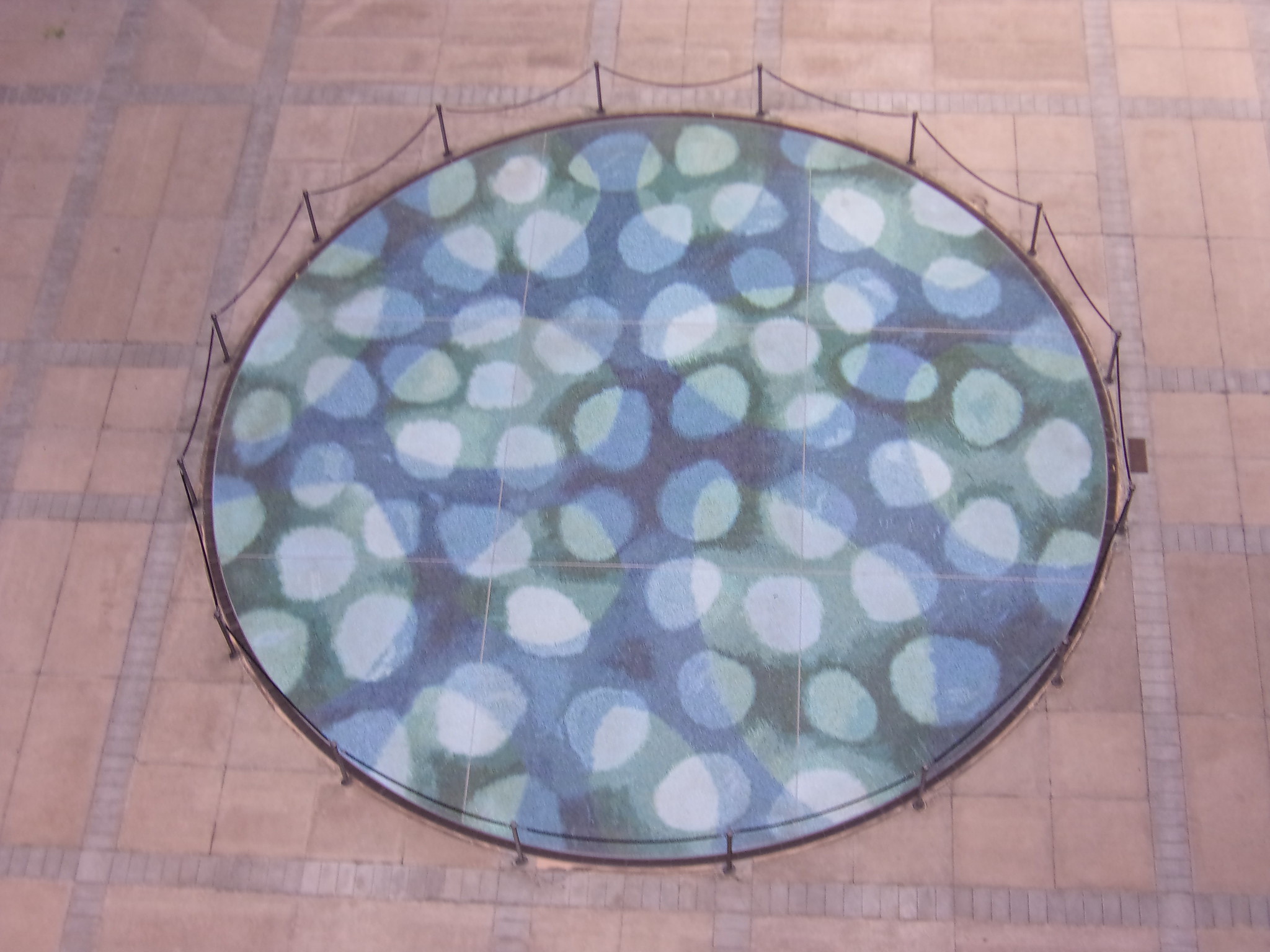 This mosaic is intended to look like a pool of water. Not a good thing for the center of a building. Photo by Jimmy Emerson, via Flickr.

“There is no there there.” Gertrude Stein could have been describing the interior of Hawaii’s state capitol building. That’s the first impression that you get when you step inside. It mostly feels like the building isn’t there. No heart, no soul, no brain, no guts—just a big open hole.

And it’s got water in the middle. The centerpiece of the Rotunda courtyard is a mosaic called Aquarius by the artist Tadashi Sato. The artwork depicts stones underwater (like a tidepool). I actually thought that part of the fixture was a standing pool of water, but it turns out that’s just a flaw in the building and repairs have been made over the years to try to correct it. I had thought it was deliberate—dangerous, but deliberate…

The center of the Capitol Building contains…nothing! Worse than nothing, there is a “pool” of water. Photo by Daniel Ramirez [CC BY 2.0], via Wikimedia Commons

Regardless of the physical presence (at times) of water, the work still represents a pool. Water in the very center of a space is not good feng shui. The element that should be represented in the center is earth. Mix earth and water and you’ve got mud—legislative mud! Doesn’t that sound murky?

By the way, while helping me to research photos for this post, my blog collaborator Dawn over at Watermark Publishing (my publisher) found this remarkable virtual tour of the Capitol grounds. It has some excellent close-up photos of some of the aspects I covered in the previous post  on the building’s exterior. (In particular, you can really see what I mean when I talk about fountains that point away from the building when it goes into the detail on the hibiscus spouts.) I recommend you refer to it to see additional images of the legislative chambers that help illustrate the points I make below.

The two legislative chambers, where laws are made, are located below ground level—and that’s where dead people are buried. My colleague, the deservedly-esteemed feng shui master Clarence Lau, pointed that out to me. (He’s the number one feng shui consultant in Hawaii. He feng shuied the governor’s mansion, and he’s an expert in both yin and yang feng shui—houses of the living and houses of the dead (graves).) It really would be better to make laws from a more “elevated” place. I’d call that common sense symbolism. 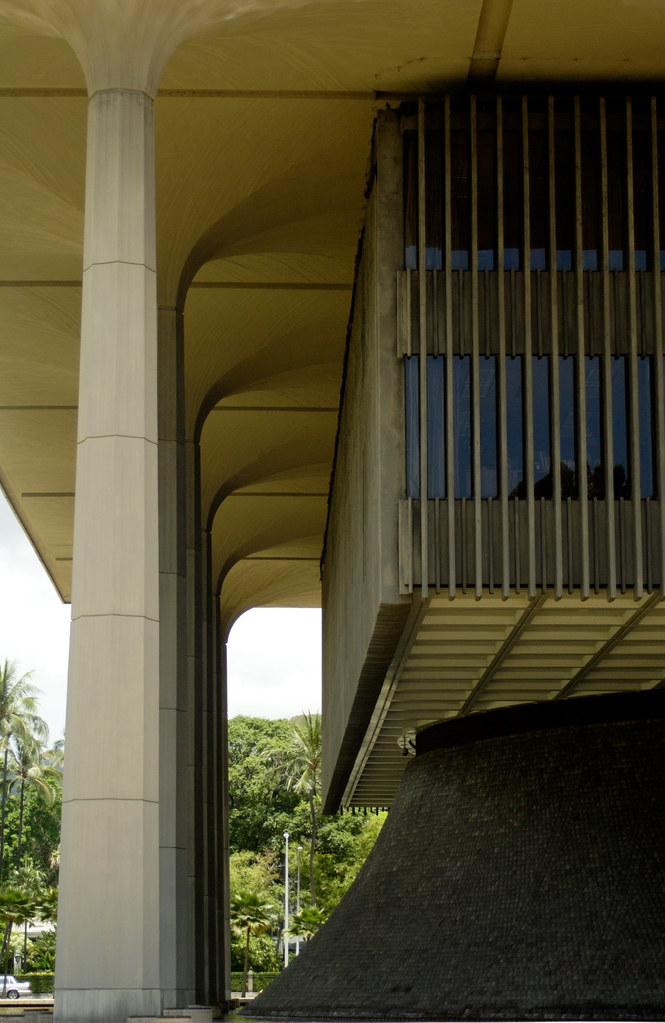 You can clearly see the concave shape of the slope in this photo. That strange angle is what makes the walls of the chambers so oppressive. Photo by Jenn G, via Flickr.

The chambers are oppressive because the walls give the impression that they are bulging in (as if you are about to be buried alive). The idiotic symbolism is supposed to be that you are inside of a volcano. Well, being inside of a volcano is not my idea of a comfy place, not to mention that the most basic part of the shape is totally wrong. The walls of the legislative chambers (on the outside) are concave. Volcanoes are convex objects, not concave objects.  I live on the slope of Mauna Loa. It’s a convex mountain, the largest one on the planet, and to my mind, the most beautiful.

The legislative chambers also have huge, obnoxious chandeliers. They look sort of like clusters of UFOs. (According to the official brochure, they are supposed to represent the sun and the moon.) My husband and I were watching the televised public statements (broadcast from inside the chamber) during the lead-up to the Hawaii gay marriage act. I couldn’t watch them for very long; the statements were gross, bigoted, and intensely stupid. (No, I don’t want to marry my dog, thank you!) My husband saw the chandelier and said, “What is that?” I said, “Yes, that’s right.”

This photo gives you a real sense of how oppressive that wall and tapestry are, looming over everything. Photo by By Kerry Gershaneck [Public domain], via Wikimedia Commons

On the main wall of the House of Representatives chamber (that’s the red-carpeted room; the Senate chamber is blue) is a large abstract artwork that screams “contention.” In many photos and on video, it appears that the only two colors are shades of red and black (in feng shui these colors represent fire and water, opposing elements) and the shapes don’t look friendly—lots of triangles and arrowhead shapes (fighting, bickering, and backstabbing).

Here you can see the bulging-in wall, the tapestry that screams conflict and the bizarre chandelier. Photo by hihousedems, via Flickr.

In better-lit photos, like the second image, it becomes apparent that the colors also include browns and muddy greens, but there is no integration between them. I addressed this issue in my video post on stripes and conflict—for harmony, you never want to pick a design with bold demarcations between the colors; that just represents different people’s opinions staying completely separate.

So, the building would make a dandy art museum, and the chambers would make dandy concert halls. The people would be better served with a much more regular building—only, pray God, it doesn’t look like Kapolei. (Another example of “no there there.”)