The Hawaii State Capitol Building is square. I can say that that is its (one) good point. Photo by James W. Rosenthal, via Wikimedia Commons

I was recently on Oahu for a round of library presentations, workshops and consultations, and every time I am there, I am reminded that I have meant to write about our state capitol building. I have a lot to say about it!

I’ll start this on a positive note by saying the one (and only one) good thing there is to say about the Hawaii State Capitol Building, from a feng shui viewpoint. It’s square. That’s it, that’s the only thing that building has going for it. 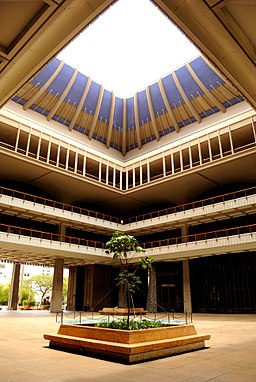 I suppose it adds drama, but this hole in the roof is a big, gaping feng shui flaw. You can also see in this photo that all the balconies are cantilevered; there are no supports under the edge closest to the center courtyard. Photo by Daniel Ramirez [CC BY 2.0], via Wikimedia Commons

It’s on the wrong side of the road (the ocean backs it up), and it has that big hole in the center of the roof. The hole symbolizes several things, none of them good: damage, energy leaking away, inadequate shelter…

The building is what I’d call “’60s Brutalism.” In case you don’t know, brutalism was actually the name of an architectural style. First floors (especially) were made overscale so that humans would seem more insignificant. (I think I’m being fair to this atrocious style.) This exact same style of public building was popular in mid 1960s. (Look up “Woodrow Wilson School of Public and International Affairs,” and you’ll see an amazingly similar building.)

Back to the Capitol Building’s other problems: The skinny white columns don’t provide adequate support for the offices above, beside or cantilevered over them. (Skinny columns were also a feng shui problem at the Iolani Palace.) Below those same offices is water (the moat that keeps people from reaching the building), and that’s not an auspicious element to have under your feet, because of water’s instability.

Here are those “palm tree” columns standing in all that water! Photo by Daniel Ramirez [CC BY 2.0], via Wikimedia Commons

Several people have told me that the columns are meant to represent palm trees. But think about that: How would you like your office to be on top of a palm tree—swaying in the breeze? And when’s the last time you saw a palm tree growing out of water? That just never happens. (The brochure that the state published about the capitol building describes the columns as representing “native royal palm trees.” Royal palms are certainly not native to Hawaii; only Loulu palms are native.)

The moat has spraying fountains. The ones that spray in all directions are fine, but the ones that start at the base of the building and spray outward symbolize a foundation of government waste. They are difficult to see in the photo above, but they are along that ledge between the two columns, shaped like small hibiscus flowers.

There’s way too much cantilevering going on in the Hawaii’s capitol building. (A cantilever is a beam or platform anchored at one end and projecting out without any support under the other end, often at extreme length. Think of a diving board; in buildings the platform is much more rigid, but you get the idea.) What you want in a building is the opposite of cantilevering. A building that gets progressively smaller, as it goes up from ground level, is considered to have stable support and grounding. State capitols that show good feng shui in these areas (as well as stunning style) are in Connecticut and Nebraska.

This imposing-looking (fake metal) seal looks like it’s about to drop onto some poor unsuspecting person’s head. Photo by Daniel Ramirez [CC BY 2.0], via Wikimedia Commons

The original models of the capitol didn’t show the huge disks of the state seal. It turns out that those big disks (think guillotine) are hung in a way that implies they are very heavy, but they’re made of a very lightweight material. (In other words, fake. Hardly a good connotation for something representing our state government.) So, as you walk into the building, you pass under a huge, intimidating heavy-looking, guillotine-shaped object. That’s hardly an ideal entrance, and entrances are so important.

On the floor that is directly above the columns, there are these cement “wings” (lots of them) that are probably supposed to be light baffles. They are shaped exactly like blades, and they are aimed in at those offices. (You can see what I mean in the photo above, behind the seal, as well as in the very first photo.)

My next post will be about the interior of the capitol building. I don’t think you have to wait for that article to understand why I give our state politicians a lot of slack when they make stupid decisions over and over again. If I had to be in an environment like that, I doubt that I’d do my best work.