My mom’s 94 and I recently asked her, “Who else in our family was gay?” She exclaimed, “That gene runs in our family!” I found out that her father’s youngest brother, Perry Twitty, was gay. Also, Perry’s great uncle Hiram Twitty was gay. A little after the Civil War he was last seen (by a family member, anyway) in Mobile, heading for Galveston. Mama said that (almost without exception) gay people left rural areas and went to some town or city. I asked her when she figured out that I was gay. She said it was when I asked for a doll for Christmas. 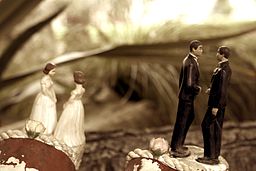 Gay couples can use gender-specific imagery in their Relationship Corners by replacing genders where a mixed-sex couple would be similarly depicted, such as using two bride dolls in a lesbian home. (Photo by Davidlud (Own work), CC-BY-SA-3.0, via Wikimedia Commons)

I remember asking for that doll. I was staying with my grandmother (Lyda Twitty kept me while my folks taught school at Margerum, Alabama) and my Uncle Bradley was visiting in the kitchen. He caught me off guard while I was going from the den to the dining room. You had to make a brief visit through a little bit of the kitchen to get to the dining room. I was shy and expected to slip quietly into the dining room, and was surprised when Bradley all of a sudden asked me, “What do you want Santa Claus to bring you?” I’d already made it into the dining room, and I turned around and answered him honestly. “I want a doll.” “What kind of doll?” he asked. Even at that young age (I was probably six) I knew better than to continue with honesty, so I didn’t say bride doll—I almost did, but I said “Boy doll.” It was the most macho thing I could think of—this was before GI Joe.

In feng shui, you’re using your home and your possessions to give out the message: “Send me the right person, please.” I arranged pink silk lotus flowers in the Relationship Corner of my studio apartment, and two seconds later my phone rang with a friend calling for a date. That quick response may have been my angel poking her elbow in my ribs saying, “This is gonna work!” Six months later I met my spouse. His partner was passing away around the time I was arranging the flowers. When I let those flowers go, I donated them to a church that used them respectfully.

This “David and Jonathan” litho by Reuven Rubin hangs high up in the Relationship Corner of our living room. We also have “Lucky Bamboo” in the maroon wall pocket.

That story is a big part of the reason I decided to be come a feng shui professional. I knew from my own experience that feng shui worked, and that I was good at it. I, like many gay men, have an intuitive experience of interiors—and I know that’s part of the reason I have a good reputation for helping people create feng shui interiors that don’t look feng shui’d—they just look good, and feel great, and by golly, that influences people.

The punch line of this article is that there is no difference in feng shui for gay or straight people—how could there be! Different as we may be in some areas, we’ll all still human energy, and that’s what feng shui sets about to influence. That being said, if gay people use gender specific imagery in the Relationship Corner, the two beings should be the same gender, if the different genders are usually visually obvious. For instance, two bride dolls would be perfectly appropriate in the Relationship Corner of a lesbian home. My husband inherited this “David & Jonathan” print from his late partner. We both love it and it hangs in the Relationship Corner of our home.